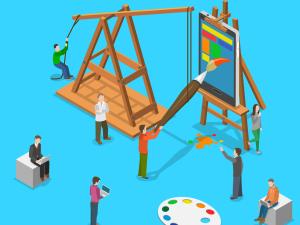 Millions of users are downloading mobile apps to devices they use every day. When, though, they feel unsatisfied with functionality and visual quality of mobile apps, they may remove it without a second thought. There are millions of apps on various platforms at the users’ service; however, users only allow those that impress them to hold space on their smartphones.

We may say that success of a mobile app depends on its target audience wanting to use it again and again. The increase in the rate of usage does, in turn, depend directly on the effectiveness of the app. Aside from its primary functions, an app’s looks are also influential on increasing its use. In fact, it almost became a necessity to bolster the service an app provide with visuals in this intensively competitive environment.

Have you ever thought what feedback would your mobile app’s looks may provide you? Here are the advantages provided by paying close attention to the visual aspect of app design.

It is easy to understand

Surveys show that human brain processes the visuals faster compared to text. In light of this information, we can conclude that the looks of the app are a very efficient tool to convey the message to the users. With content bolstered with visuals like infographics, you can provide your audience your services in a more practical way. Check this easy method to create an app without coding

Users get exposed to many digital messages in a day. They remain uninterested towards the majority of these messages. There are many apps in the market in different categories and only a few of them succeed in getting user’s attention.

In such a competitive environment, apps need to do something to show themselves. Whereas the new apps bolster their designs with visuals and avoid long and tedious content, older apps in turn update themselves and aim to become more efficient this way. Because, in the mobile world, content that draws attention with its looks gets noticed much easier by the users, instead of long lines of text, tabs, and redirects.

Having thrust of users is among the important factors that influence the fate of your mobile app. To win the trust of your audience, you can present them a user-friendly interface and an attractive look. This way, you will create an impression for a mobile app which is an expert in its field and give signs of professionalism to your users regarding the services you provide.

As you may see, visual quality of mobile apps can have a significant effect on user preferences. We can hear you asking “but how do I get unique and attractive looks?”. With MobiRoller you can create the looks and design of your app very easily without needing a designer. Create your MobiRoller account without losing time, and own an impressive mobile app.